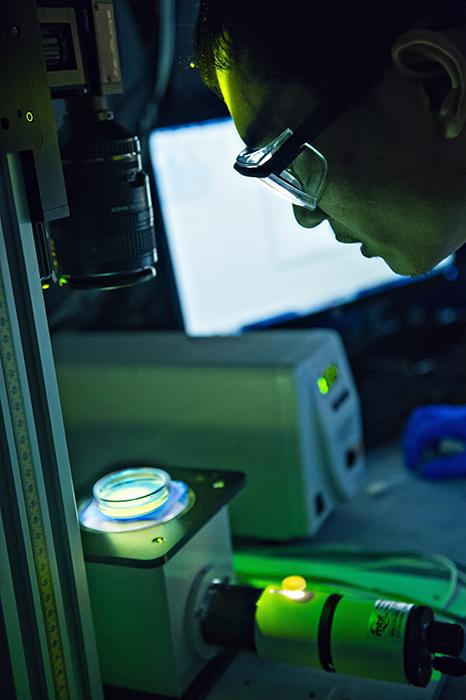 We are a sensory biology lab. We ask the following questions to better understand how animals sense their external and internal world through various sensory systems:

To address these questions, we primarily use the genetic model organism C. elegans because of its simple and well-characterized nervous system. Because many sensory receptors and channels are evolutionarily conserved, we also explore their roles in somatosensation and pain sensation in mammals, using mouse models. We take a multidisciplinary approach, combining molecular genetics, behavioral analysis, functional imaging and electrophysiology.

The environment has a profound impact on animal behavior. The ability to sense environmental cues and to adjust behavior in response is essential for an animal’s life. Molecular sensors are a central player in sensory perception. These sensory receptors, which are expressed in sensory neurons/cells, detect sensory inputs and transduce them into electrical and/or chemical outputs to trigger behavioral responses. In some cases, sensory receptors are also ion channels (ionotropic) that are directly activated by sensory stimuli, leading to the excitation of sensory neurons/cells. In many other cases, sensory receptors are metabotropic and require downstream signaling molecules to transduce sensory signals. Identifying sensory receptors/channels and understanding how they detect and transduce sensory information represent a major task in sensory biology research.

C. elegans worms are a powerful genetic model for the study of various questions in neuroscience, particularly sensory neuroscience. To survive their harsh environment, worms have evolved complex sensory systems to sense and react to sensory cues, such as temperature, touch and chemicals. Recent work has greatly expanded the repertoire of sensory modalities in C. elegans. For example, we demonstrated that, despite the lack of eyes, worms can sense light and engage in phototaxis behavior mediated by photoreceptor neurons, enabling them to avoid lethal doses of ultraviolet light. We also showed that worms possess the sense of proprioception mediated by stretch-sensitive proprioceptor neurons, which allows these animals to control body posture during locomotion. Apparently, worms have evolved most, if not all, of the sensory modalities found in mammals. Importantly, the genes encoding sensory receptors and channels in worms, which detect sensory stimuli, tend to be evolutionarily conserved in other species. This, together with its short generation time (~3 days) and facile genetic tools, makes C. elegans an excellent model system for identifying novel sensory receptors/channels and signal transduction mechanisms.

The model system C. elegans represents an excellent model for approaching these questions because of its simple and well-annotated nervous system. We have developed tools to quantify behavior and record neural circuit and synaptic activities, which greatly facilitate the dissection of neural circuit and synaptic mechanisms underlying behavior. We focus on sensory behaviors, aiming to understand how neural circuits and synapses process sensory information from upstream sensory neurons to produce behavioral outputs, and how genes and drugs regulate these processes. To do so, we take a multidisciplinary approach, combining functional imaging, molecular genetics, optogenetics, behavioral analysis and electrophysiology.

Sensory Regulation of Aging and Longevity

Sensory cues regulate not only an animal’s behavior, but also its physiology — such as aging and longevity. In addition to nutrients, environmental cues such as temperature and chemicals have a profound impact on lifespan. For example, both cold- and warm-blooded animals live longer at lower body temperatures, highlighting a general role of temperature in lifespan regulation. However, the underlying mechanisms remain largely unknown. We have recently identified a cold-sensitive channel as a thermal sensor that detects temperature decreases in the environment to extend lifespan, demonstrating that genes actively promote longevity at cold temperatures. This calls into question the century-old view that cold-dependent lifespan extension is simply a passive thermodynamic process.

We are interested in identifying new genes and pathways that mediate temperature- and chemical cue-dependent regulation of lifespan and healthspan in C. elegans. Ultimately, we would like to derive a thorough understanding of how sensory cues modulate aging and longevity.