Autophagy and the Cytoplasm to Vacuole Targeting Pathway 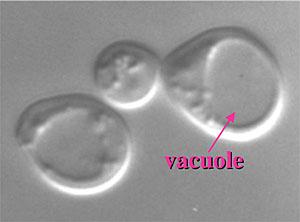 One of the hallmarks of eukaryotic cells is the presence of a variety of organelles that allow the separation of various reactions into discrete subcellular compartments. It is critical that the proper proteins be efficiently sorted to each of these organelles so that they can carry out their correct function. The importance of protein targeting is underscored by the fact that many genetic diseases are associated with the absence of particular proteins from specific organelles. The yeast vacuole (figure 1) plays a central role in cellular physiology.

This organelle is analogous to the mammalian lysosome. The advantage of carrying out these studies in yeast is that this system is more amenable to various genetic and molecular genetic approaches than are higher eukaryotes. The pathways used in protein targeting, however, are quite similar so that the information we learn from studying yeast will be applicable to animal cells. The vacuole is integrally involved in numerous cellular processes. It plays a role in osmoregulation, cytosolic ion and pH homeostasis, storage of metabolites, removal of toxic substances and macromolecular degradation and recycling.

There are a variety of proteins both in the vacuole membrane and lumen. Most of these proteins reach this organelle by transiting through a portion of the secretory pathway; they enter the endoplasmic reticulum, move through the Golgi complex and are diverted to the vacuole at the trans Golgi Network (figure 2). Correct delivery is dependent on sorting information within the vacuolar protein, the presence of specific receptors that recognize theses signals and other factors including compartment acidification. Recently, we have been analyzing an alternate pathway for vacuolar protein targeting.

Aminopeptidase I (Ape1) is a resident vacuolar hydrolase that is targeted to the organelle independent of the secretory pathway. This protein is synthesized as a cytosolic precursor having an amino terminal propeptide. The propeptide is proteolytically removed in the vacuole to generate the mature, active hydrolase. We have been examining the mechanism of Ape1 targeting through various approaches.

A mutational analysis was carried out to analyze the vacuolar targeting signal in precursor Ape1 (prApe1). We found that the propeptide is required for vacuolar targeting. Mutations in the first helix of the prApe1 propeptide cause the precursor form of the protein to accumulate in the cytosol and prevent binding to the target membrane. Random mutagenesis identified a temperature sensitive mutation in the targeting signal. We have used this temperature sensitive mutant along with the wild type protein to demonstrate that the Ape1 precursor rapidly oligomerizes in the cytosol and imports in a dodecameric form. We have begun to establish an in vitro system to analyze prApe1 targeting. This will allow us to assign a biochemical function to the different components of the subcellular targeting machinery involved in Ape1 localization. Precursor Ape1 targeting is temperature-dependent and also requires both ATP and GTP hydrolysis. Using biochemical techniques coupled with electron microscopy we have directly demonstrated that prApe1 import is vesicular. 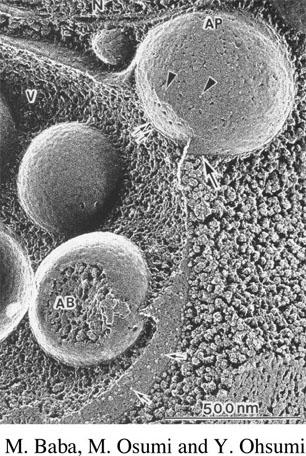 We have used a classical genetic approach to identify mutants in the prApe1 targeting pathway. These mutants are called cvt for cytoplasm to vacuole targeting defective. Most of these mutants accumulate precursor Ape1 in the cytosol. By cloning the genes that complement the mutant defects, we will be able to analyze the gene products to determine their role in the import process. We have determined that many of the cvt mutants overlap with mutants defective in autophagy which is known to be a vesicle-mediated process (figure 3), supporting our view that prApe1 import involves a vesicular mechanism. All of the genes involved in the Cvt and autophagy pathways have been renamed ATG for autophagy-related.

Autophagy is an essential process that allows cell survival under certain stress conditions, yet the molecular details of this process are only now becoming understood. Autophagic dysfunction is associated with various diseases in humans including cancer and neurodegenrative diseases such as Parkinson's and Alzheimer's.

Recent analyses of the ATG gene products have begun to provide insight into the molecular mechanism for prApe1 import and autophagy. For example, we have characterized the steps involved in cargo recognition and packaging, which are critical for selective types of autophagy such as the specific degradation of organelles. In the case of prApe1 import, we determined the temporal order of action of the cargo receptor Atg19, the adaptor protein Atg11 and a protein that acts as a structural component of the vesicle, Atg8 (Figure 4).

The process of vesicle formation requires a large set of the Atg proteins including Atg5, Atg12 and Atg7. The Atg7 protein has homology to E1 ubiquitin activating proteins. It participates in a novel conjuation process (Figure 5) that results in the covalent attachment of Atg12 to Atg5. These proteins bind Atg16 non-covalently and dimerization of Atg16 forms a higher order complex. Atg7 is also involved in a second unique conjugation event that results in the covalent modification of Atg8 with phosphatidylethanolamine. These two conjugation systems are needed for the formation of the sequestering vesicles in the Cvt and autophagy pathways.

Autophagy is an essential process that allows cell survival under certain stress conditions, yet the molecular details of this process are only now becoming understood. Autophagic dysfunction is associated with various diseases in humans including cancer and neurodegenrative diseases such as Parkinson's and Alzheimer's disease.

Further studies of these proteins are needed to complete our understanding of this complex sequestration and import process. Many questions about Ape1 localization remain to be answered including: 1) What is the origin of the membrane that first binds the cytosolic precursor Ape1? 2) How are the cargo proteins specifically identified? 3) How is binding of precursor Ape1 detected and how does this binding trigger completion of vesicle formation? 4) How is the vesicle targeted to the vacuole? 5) What proteins are necessary for vesicle fusion and breakdown within the vacuole?

Ape1 is a useful marker protein that will allow us to address these questions. These studies will provide important information about vacuolar targeting, autophagy and eukaryotic cellular physiology.