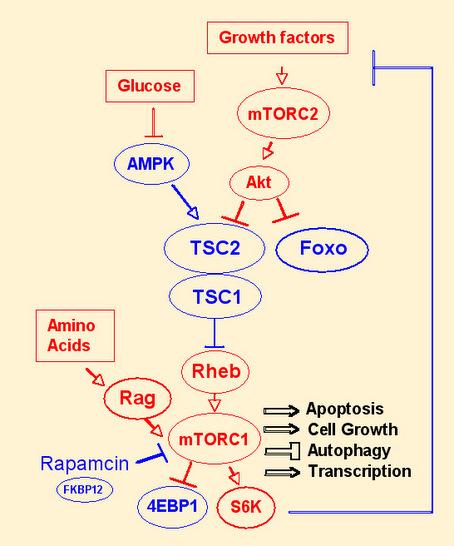 mTOR (mammalian target of rapamycin) is an evolutionarily conserved serine/threonine protein kinase implicated in a wide array of processes such as cell growth, proliferation, survival, and autophagy. mTOR forms two distinct functional complexes termed mTOR complex 1 and 2 (mTORC1 and mTORC2). mTORC1 activity is sensitive to inhibition by rapamycin; whereas, mTORC2 activity is resistant to the drug. mTORC1 exists as a multiprotein complex containing mTOR, Raptor, and mLST8, while mTORC2 consists of mTOR, Rictor, mSin1, and mLST8. mTORC1 can be activated by both growth factors and nutrients such as glucose and amino acids and regulates the activity of the translational initiation machinery by modulating S6 kinase activity and eIF4E binding protein (4EBP1) phosphorylation. This regulation leads to increased protein synthesis and cell growth. On the other hand, mTORC2 activity is mainly regulated by growth factors such as insulin and IGF-1 and regulates the activation of Akt, a kinase involved in cell proliferation and survival.

My studies on the regulation of mTOR signaling revealed that the tumor suppressor proteins TSC1 and TSC2 function as negative regulators of mTORC1 (NCB 2002 Inoki et al). TSC1 and TSC2 form a complex that contains GTPase (GAP) activity, resulting in the suppression of cell growth. Loss of function of either TSC1 or TSC2 causes Tuberous Sclerosis Complex (TSC), an inherited hamartoma syndrome. Tumor formation in the heart, lung, brain and kidney causes severe complications in TSC patients. A search for targets of the TSC complex resulted in the identification of the small G protein Rheb as an essential activator of mTORC1, providing a direct link to the GAP activity of TSC2 (Gene & Dev 2003 Inoki et al). Furthermore, we demonstrated that Akt phosphorylates and suppresses TSC2 activity (NCB 2002 Inoki et al). These findings revealed not only the function of the tumor suppressor TSC proteins, but also a mechanism for mTORC1 activation by growth factors. These studies also suggested that rapamycin, an FDA approved immunosuppressant drug in organ transplantation, might be a potential treatment for TSC tumors. In fact, a preliminary clinical trial indicates that rapamycin has a potent anti-tumor effect in TSC patients. The TORC1 complex is also regulated by nutrients such as glucose and amino acids, and activated by exposure of cells to high glucose, while inhibited under low glucose conditions. We elucidated the mechanism by which this occurs with the discovery that AMP-activated protein kinase (AMPK), an essential cellular energy sensor, phosphorylates and activates TSC2, resulting in the inhibition of mTORC1 activity (Cell 2003 Inoki et al). These findings revealed that the TSC complex plays a critical role in sensing intracellular energy levels via AMPK phosphorylation, in turn regulating protein synthesis and cell growth by modulating mTORC1 activity. We later demonstrated that the tumor suppressor kinase LKB1 (AMPK kinase) inhibits mTORC1 via TSC2 activation (Gene & Dev 2004 Corraddeti et al). This finding revealed a role for LKB1 as a tumor suppressor to inhibit the mTORC1 pathway, and suggested that rapamycin could also be a potential treatment for Peutz-Jeghers syndrome (PJS), an inherited hamartoma syndrome (Nature Genetics 2005 inoki et al).

Finally, we have found that Wnt proteins, which have been implicated in embryogenesis and cancer, activate the mTORC1 signaling pathway by inactivating TSC2 (Cell 2006 Inoki et al). GSK3, a downstream target for inhibition by Wnt signaling, functions in cooperation with AMPK to phosphorylate and activate TSC2. Importantly, Wnt-induced tumor development in mice was inhibited by rapamycin. These findings suggested an unexpected function for Wnt signaling in translational control in addition to the canonical β-catenin-dependent pathway.

These studies revealed the regulatory pathway to explain how mTOR receives growth factor and energy inputs to exert its function. Furthermore, our studies uncovered roles of mTOR signaling which serves as the molecular basis for the development of many cancer related diseases.

Recent studies have uncovered numerous functions for mTOR, particularly regarding its role in cell growth control. However, despite these advances, numerous questions remain.

To address these questions, we are purifying interacting proteins within the TSC-mTOR signaling pathway. Furthermore we are characterizing tissue-specific TSC knockout mice to understand physiological and pathological roles of the TSC-mTOR pathway in a wide array of organs, including brain, liver, muscle and kidney.