Even if the laboratory equipment wasn’t obviously antiquated, the texture of the film and muted palette scream 1970s. The video clip playing on a screen in the boardroom of the U-M Life Sciences Institute on this cold winter afternoon was unearthed during the tidy-up of old computer files.

“I have a Ph.D. in biophysics and I do enzyme research,” says the woman on the screen. “But I’m also a mother, and I know the importance of vitamins for my family. That’s why I choose Tang.”

In the background, an automatic titrator beeps incessantly.

“I’m not exactly the kind of person who ever visualized herself as a model for a TV commercial,” says LSI Professor Emerita Rowena Matthews, reached by phone at her winter home in Tucson, Arizona.

In 1972, Matthews was a postdoctoral researcher in U-M’s Department of Biological Chemistry when she received an unexpected call from her department chair. He explained that a friend who worked in advertising was looking for a female scientist with a doctorate and two children.

“I was the only woman he knew who fit the requirements,” says Matthews, who sons were 8 and 2 at the time.

While almost everything about the commercial seems humdrum and all-American today, the fact that its main character was a young, female scientist was decidedly noteworthy, Matthews points out. At the time, her life was not well represented in popular culture.

“That was the era of ring-around-the-collar. You know, women in commercials who would hold up the laundry and show how proud they were of how clean it was,” she explains. “So, to me, these Tang commercials were not just good for the company, they were wonderful for women. Here were women who were scientists and mothers. I just thought that was revolutionary.”

And Matthews’ family was excited about the prospect of the commercial, too. So she sent her picture to the advertising agency, and before long, a representative arrived at her home to interview the family.

On screen, the 30-second commercial cuts from the laboratory to the Matthews’ home — though not their real one.

“I like the vitamins A and C that Tang delivers,” Matthews says as she pours two glasses and delivers them to her waiting sons. “And, of course, it was one source of nutrition for the astronauts. But the boys are sold on Tang because it tastes good. That’s important. I wouldn’t give my children something they didn’t like. Right, Brian?”

“Oh, Mom,” he says with exasperation as she tousles his hair.

Now in his 50s, Brian recalls consuming quite a bit of the orange drink during the making of the commercial. And, he points out with a lighthearted tone, it was difficult to convince his younger brother to wait until after his mother had finished her lines.

“The kids at school probably talked about it for a month, and then it just became background noise,” he says.

Because she had to miss work, Matthews billed the agency for one day of her postdoctoral salary.

“They must have laughed until they cried,” she says. “They talked to me and explained there were these things called residuals” — small payments delivered to her family each time the commercial aired. The unexpected money eventually helped pay for the boys’ college education. 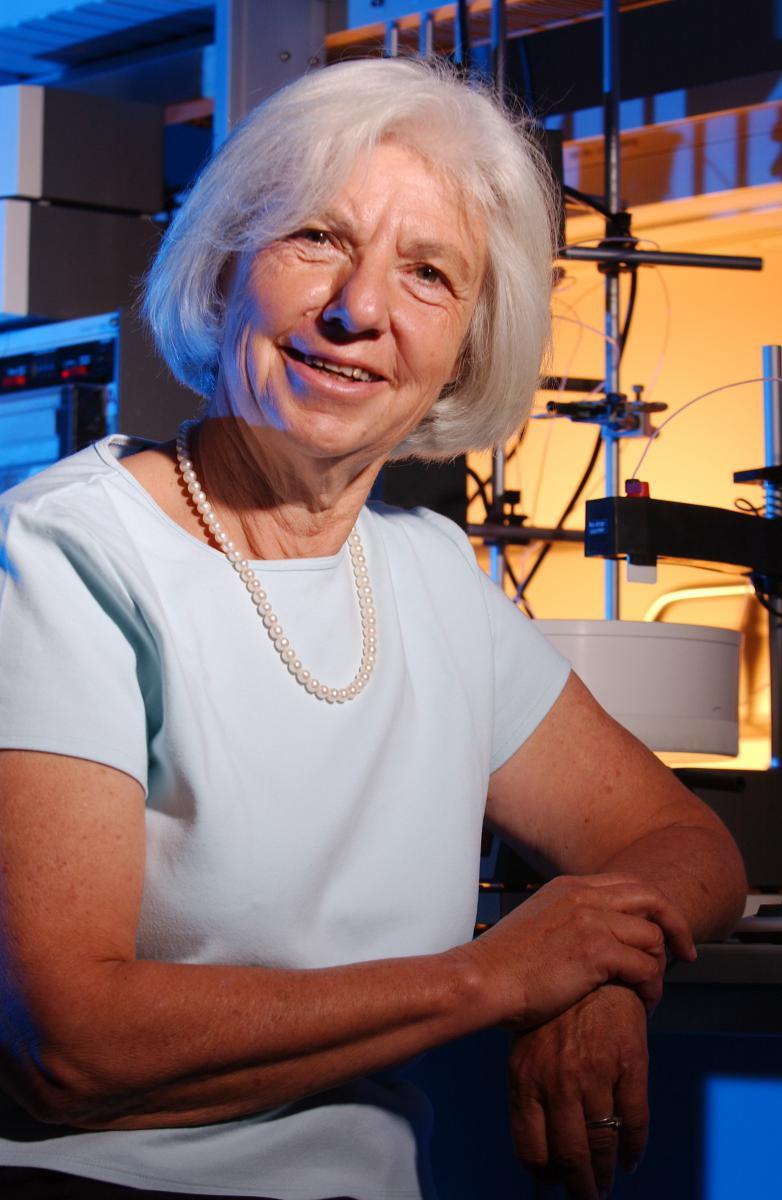 Matthews graduated from Radcliffe College in 1960 and then spent three years in the Harvard laboratory of George Wald, helping lay the groundwork for the discovery of the molecular reactions of rhodopsin, a protein that helps humans and other animals perceive light. (Wald was awarded a Nobel Prize in 1967.) Matthews wanted further training to investigate the human body at the molecular level. In 1963, she and her husband moved to Ann Arbor, where he completed his medical residency, and she undertook her doctoral work.

At the time, women accounted for just 2 percent of Ph.D.s in physics, 6 percent in chemistry, and 12 percent in biological and agricultural sciences, according to the American Association of University Women. Though Matthews’ graduate experience was positive, she was frustrated by the expectations that followed its completion in 1969.

“There was a feeling, very strongly then, based on mostly the fact that most professors were men, that the right thing to do was get your Ph.D., leave and go somewhere else to get a job,” she says.

In that era, women were more likely than men to be married to someone with an established career, making it far more difficult to just pick up and move.

“She didn’t have many role models for mixing family and professional life,” her son Brian notes.

Fortunately, Matthews’ graduate and postdoctoral mentors “campaigned relentlessly” on her behalf. In 1975, she received an outside grant that funded her salary and her research. Samuel Krimm, Ph.D., the chair of Biophysics, offered her laboratory space. Minor “Jud” Coon, Ph.D., the chair of Biological Chemistry, brought her on as a non-tenure track assistant professor.

Matthews proved her mettle, achieving the rank of full professor in 1986. She was named the G. Robert Greenberg Distinguished University Professor in 1995.

“My chair, Jud Coon, was extremely supportive,” says Matthews, citing one of the factors that enabled her professional success. “I also had a very supportive family, healthy children, and a husband who was pretty enthusiastic about me having an independent career.”

And, of course, her research speaks for itself.

By the time she retired from LSI, her contributions to enzyme-vitamin interactions and biochemistry had been recognized by many of the most influential organizations in science and medicine including the National Academy of Sciences, National Academy of Medicine, and the American Academy of Arts and Sciences. She currently serves on the Medical Advisory Board of the Howard Hughes Medical Institute and is a Vice-President of the American Philosophical Society.