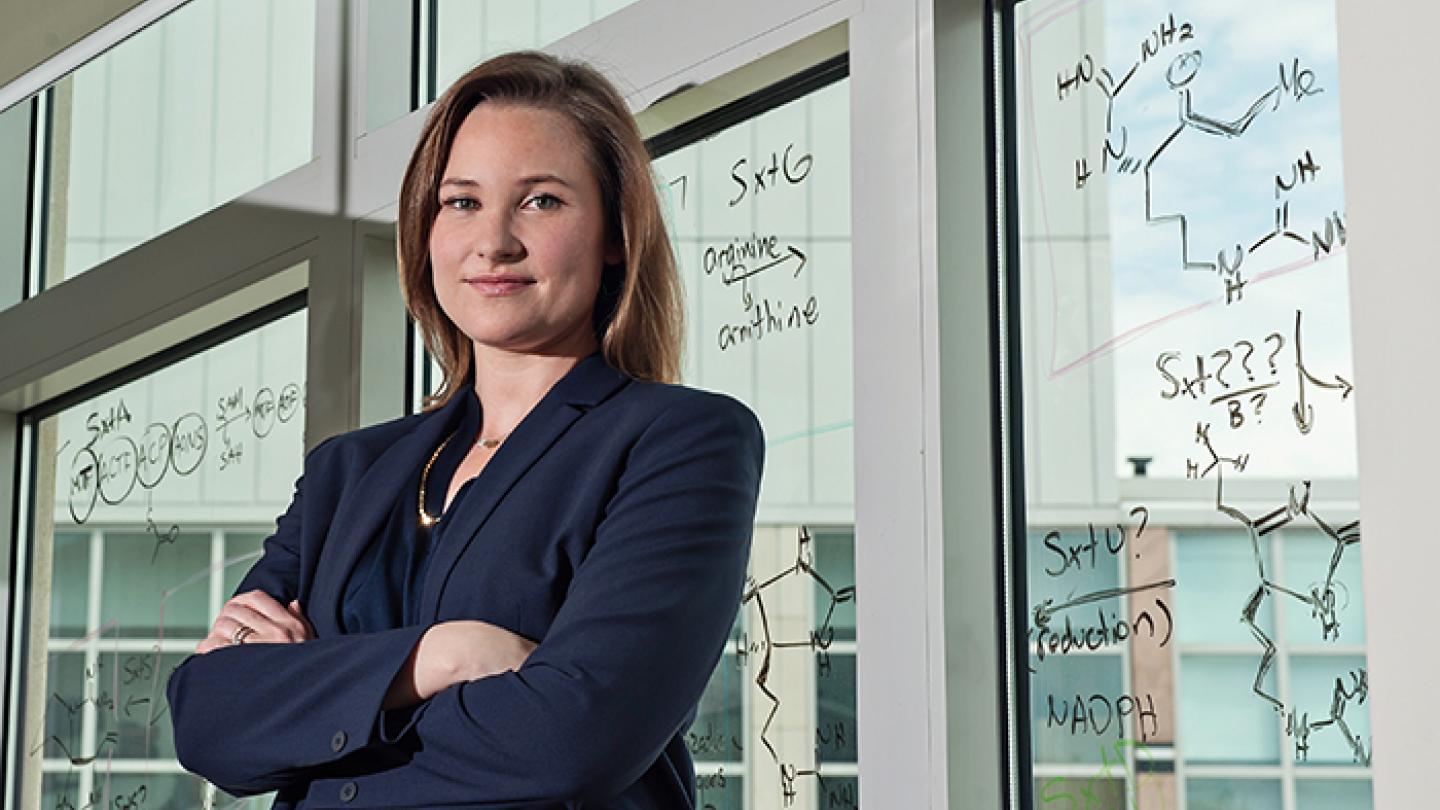 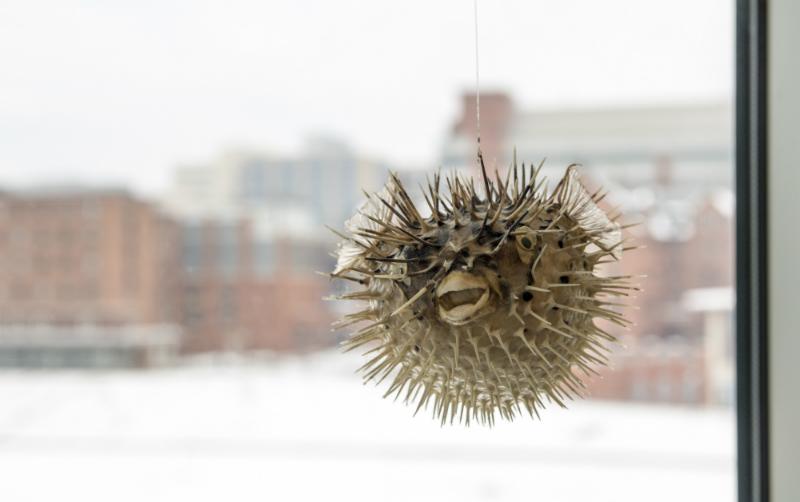 As the newest member of the University of Michigan Life Sciences Institute’s faculty, Alison Narayan’s office is still pretty spartan.

She has added only a few decorations and personal touches — a U-M football helmet signed by head coach Jim Harbaugh and a dried puffer fish.

“I should probably get some plants,” Narayan muses during a recent interview.

A Michigan native, Narayan has strong ties both to U-M, where she did her undergraduate studies before getting a Ph.D. in organic chemistry from the University of California, Berkeley, and to the LSI — where she spent the last four years as a postdoc in the lab of faculty member David Sherman.

Narayan’s new lab aims to bridge the gap between the powerful chemistry developed over millions of years of evolution by bacteria, fungi and other natural organisms, and cutting-edge synthetic chemistry techniques.

“Natural organisms have evolved to make a wide variety of potentially beneficial compounds,” she says. “The problem is chemists aren’t able to make a lot of them in the lab. So my research program is all about creating new tools that extend the reach of the chemistry.”

She continues, “We want to start with a core scaffold of molecules that are easy for chemists to make, and then let enzymes derived from nature do the difficult, later-stage chemical transformations that would be challenging or inaccessible using traditional chemical methods.

“This will allow us to create valuable compounds in an efficient and sustainable way — since many are found only in tiny quantities in natural organisms. It will also allow us to create analogs, or close variations, of compounds that may impart new, beneficial properties.”

A scientist from an early age

Although Narayan came to U-M as an undergraduate student with the idea she was going to be a lawyer, a career in science may have been more likely than she’s willing to admit. In her senior year at Frankenmuth High in “Michigan’s Little Bavaria,” she was among a handful of students who successfully lobbied for an advanced chemistry class. And in her freshman year at U-M, she not only placed into organic chemistry, she enjoyed it.

“I didn’t realize that most political science majors take courses like climate change and plate tectonics to fulfill their science requirement,” she says. “I’m looking around and there are pre-meds to my right, pre-meds to my left, engineering students behind me — and they’re like, ‘Why are you here?’ ”

Until close to graduation she kept feet in both worlds, studying for both the LSAT for law school admission and the GRE subject test in chemistry required for most chemistry Ph.D. programs.

“Then, the summer before my senior year, I had this epiphany — if I really wanted to go to law school, I could do that at any time, but if I’m actually going to pursue a Ph.D. in chemistry, I better do it now,” she says. “Science had me hooked. You answer one question and that leads to three more questions that are even more interesting.

“I ended up going to Berkeley, which was an awesome experience. I chose it because they have a great chemistry department, and also because it had that same big public university feel as Michigan.”

Her advisor at UC Berkeley, Richmond Sarpong, Ph.D., says Narayan was one of the best graduate students he ever had. And Sherman, Narayan’s mentor for her postdoctoral work, echoes those sentiments, saying, “She is one of the most complete talents I have had the pleasure of working with during my 24-year academic career.”

At Berkeley, Narayan focused on recreating useful compounds produced by nature in the laboratory. Sherman’s lab offered her a new perspective and the chance to dive deeply into the biology side of the equation — how natural organisms synthesize important compounds — while making valuable contributions to the lab with her skills as a synthetic chemist.

Already Narayan’s efforts can be seen in over a dozen publications that include Science, Nature, the Journal of the American Chemical Society and, most recently, as first author of a study in Nature Chemistry.

From pufferfish to new medicines 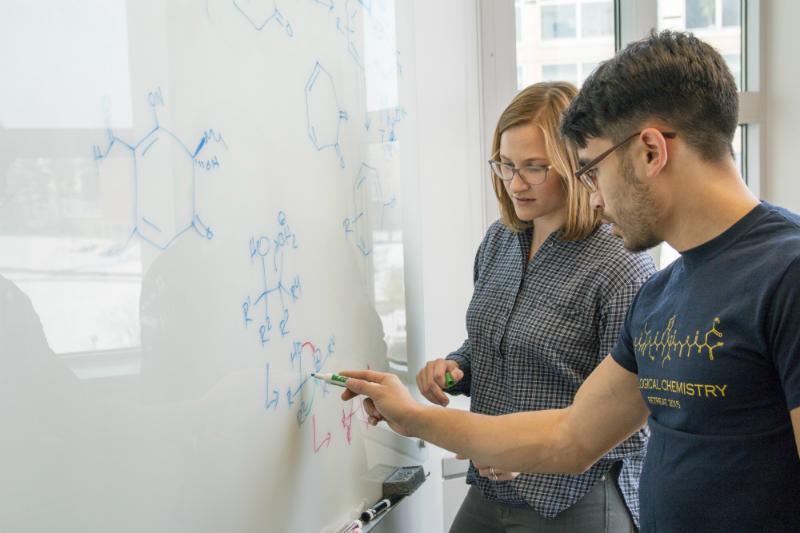 The dried pufferfish in Narayan's office is a prime example of an organism that has evolved its own sophisticated chemistry.

Considered a delicacy in Japan, chefs must train for years to learn how to prepare it and not poison diners with the deadly tetrodotoxin found in its skin and organs.

“Exactly how the structurally complex metabolite tetrodotoxin is being produced inside the fish, we don’t know,” says Narayan, holding the spiky creature in her palm. “It’s probably made by the microbial community that’s affiliated with the pufferfish — but only metagenomic analysis will tell us exactly. Understanding the way nature assembles tetrodotoxin, will give us access to new enzymes that we can use to do chemistry.”

Tetrodotoxin and other similar toxins bind to voltage-gated sodium ion channels within the body — conduits in cell membranes that let sodium ions pass from the outside of a cell to the inside. In tetrodotoxin poisoning, the channels stay open, letting the sodium ions flood in, which paralyzes the muscles and ultimately shuts down the respiratory system.

“But different analogs of these compounds have selectivity for different types of sodium ion channels in different parts of the body,” says Narayan. “If you can isolate a compound that acts only in the brain, for example, then you can start to have a therapeutic window for a variety of different diseases.”

In nature, compounds often start off with a core molecule — one that would be very simple for a modern chemist to make — but which is then acted upon by biosynthetic enzymes that conduct a series of complex transformations that could not be duplicated using traditional chemical methods.

One of the most important examples is selectively breaking a carbon–hydrogen bond to form a carbon–oxygen bond in its place. (C-H bonds are so prevalent and inert, chemists usually leave them out of their drawings.)

“Each of these oxygen atoms that is introduced onto this core molecule changes the biological activity of the molecule,” says Narayan. “So, the idea is that we can start from one common molecule, and use natural enzymes to synthesize all of the final compounds we’re interested in testing — whereas a chemist without these types of enzymatic tools would have to start at the beginning of the synthesis each time, with different materials, because this type of late-stage oxygenation isn’t something they can do with selectivity.”

Narayan is also interested in exploring and expanding the range of naturally occurring enzymes’ activity, by giving them substances to act on that are different from their natural substrates, as well as modifying the enzymes to give them the ability to act on additional substrates.

The biological activity of new compounds will be tested in her lab and through collaborations. Newly created compounds will also be added into a screening library at the LSI’s Center for Chemical Genomics, where they may produce “hits” for researchers conducting high-throughput screening — which tests a target against a wide range of materials to see if it generates any useful activity.

“This is a less direct way of looking at biological activity, but a great way to see what else these compounds could potentially do,” says Narayan.