The midbody is a transient structure at the spindle midzone that is required for the terminal stage of cell division, cytokinesis. Long ignored as a vestigial remnant of cytokinesis, emerging data suggest midbodies are released from post-mitotic cells as a large 2um extracellular vesicles, which can modulate cell fate decisions, proliferative state, tissue polarity, cilia formation, neuronal architecture and function, and oncogenesis.

Our ‘structure reveals function’ approach first demonstrated that the midbody matrix — a mysterious electron-dense region of unknown composition — is the assembly site of a phase-separated biomolecular condensate, enriched for mRNAs encoding proteins involved in cytokinesis, oncogenesis and pluripotency regulation, including transcription factors. Hexanediol-sensitivity and FRAP analysis confirmed that the midbody matrix exhibits biophysical properties expected of an RNP condensate. SUnSET analysis of protein synthesis showed that both the mitotic and post-mitotic midbody are sites of recent translation. Consistent with this, ribosomal subunits and elongation factors co-localize with puromycin labeling in a ring structure surrounding the midbody RNA core. We discovered that translation of midbody-enriched mRNAs is under tight temporal regulation, beginning in G1 after cells have formally exited mitosis, and continues after the midbody is abscised and released extracellularly from the daughters that birthed it.

Our data suggest a model in which the midbody functions as a novel organelle with a complex life cycle comprised of both membraneless and membrane-bound phases: 1) an RNP condensate is assembled at the spindle overlap; 2) spatiotemporally regulated translation is initiated as the daughter cells leave mitosis and reenter G1; 3) abscission occurs and the membrane-bound RNP granule is released; 4) the midbody is bound, internalized, and transfers information to recipient cells. 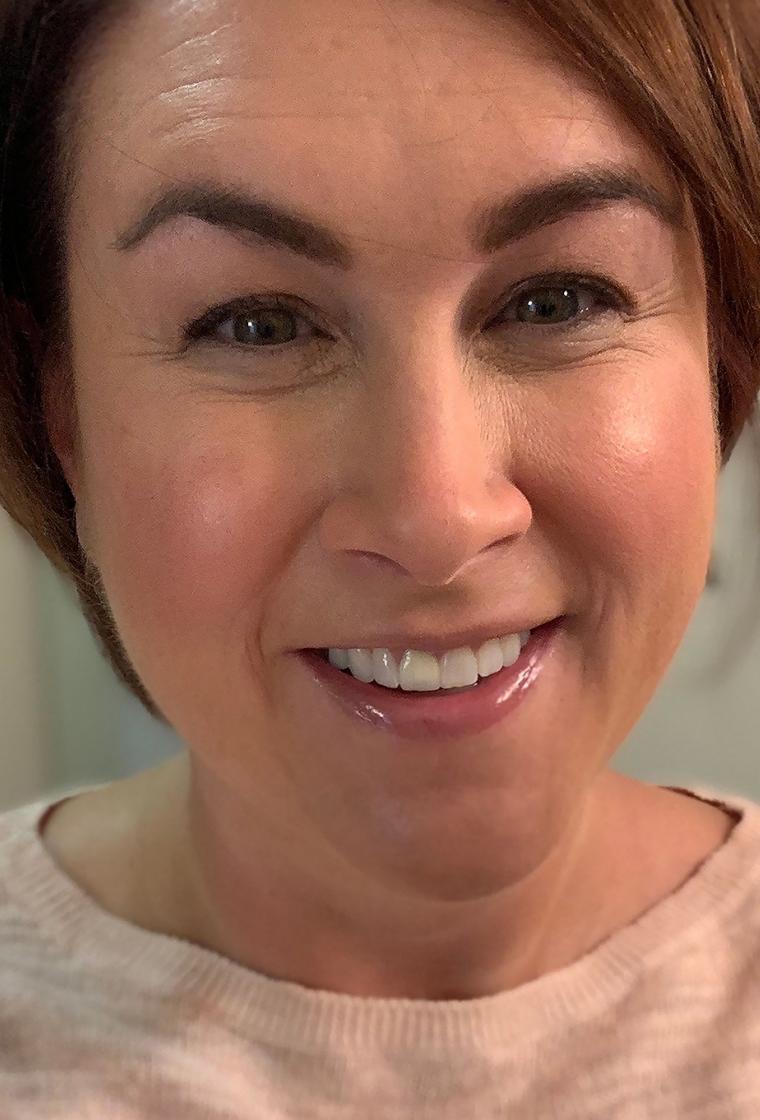 Ahna Skopis a geneticist, artist, author and a winner of the prestigious Presidential Early Career Award for Scientists and Engineers (PECASE). Her lab seeks to understand the molecular mechanisms that underlie asymmetric cell division. In 2004, she pioneered proteomic and genomic approaches to identify novel cell division proteins by utilizing biochemically purified midbodies, which was published in Science. More recently, the lab has discovered that the midbody is a translationally active RNA containing organelle. The Skop lab’s focus now is to determine how this signaling organelle behaves as novel form of intercellular communication in mammalian cancer and stem cells.

Understanding how cells divide is highly dependent on in vivo microscopy and large amounts of visual data, which dovetails perfectly with one of her other passions: art. The combination of scientist and artist inspires her to think differently and maintain an open mind. Some of her work can be seen in the main entrance of the Genetics/Biotechnology Center building on the UW-Madison campus with a 40-foot scientific art piece called “Genetic Reflections.” She has also curated and contributed to a traveling exhibition of scientific art called “TINY: Art from microscopes” from the UW-Madison campus, and she has organized the bi-annual Worm Art Show for the International C. elegans Meeting for over 26 years.

Skop is also passionate about increasing the numbers of underrepresented students in STE(A)M fields. In 2016, she was awarded the very first of two, Chancellor’s Inclusive Excellence Award for her outreach and inclusive teaching efforts. She has served as a board member for SACNAS (Society for the Advancement of Chicanos and Native Americans in Science) and currently serves on the ASCB (American Association for Cell Biologists) Minority Affairs Committee, where she has broadened her impact on underrepresented students in science nationally. Her recent book, “Genetic Reflections”, showcases the beauty of genetics, model organism biology, and DNA.

Skop majored in biology and minored in ceramics as an undergraduate student at Syracuse University. She received her Ph.D. in cell and molecular biology at the University of Wisconsin-Madison and conducted her post-doctoral work at UC-Berkeley. She is now a professor in the Department of Genetics and an affiliate faculty member in Life Sciences Communication and the UW-Madison Arts Institute at the University of Wisconsin-Madison. She mentors both scientists and art students in her lab, and also serves on the board of the Wisconsin Science Museum, where many of her art-science collaborations are on display. In 2008, she was awarded an honorary doctorate of science from the College of St. Benedicts and was named a Remarkable Women in Science from the AAAS. In 2015, she was honored as a Kavli Fellow from the National Academy of Sciences. In 2018, she was awarded the first ever Inclusive Excellence Award by the ASCB and HHMI. She currently serves as an advisor to the chief diversity officer at the NIH, and is a diversity consultant to the Chan Zuckerberg Initiative (CZI). In 2019, she was honored as one of 125 Women in STEM with an AAAS IF/THEN Ambassadorship. In 2020, she published a book with her two talented undergraduates called “Genetic Reflections: A Coloring Book.” Her science and art have been featured by Apple, The Scientist, USA Today, Smithsonian, PBS.org, NPR and Science magazine. She has recently started an online science art home décor store with her family called skopology.com. One of her great hobbies is cooking/baking (including scientific cakes); and she also manages a foodblogs, foodskop.com, and her AAAS IF/THEN funded labculturerecipes.com.