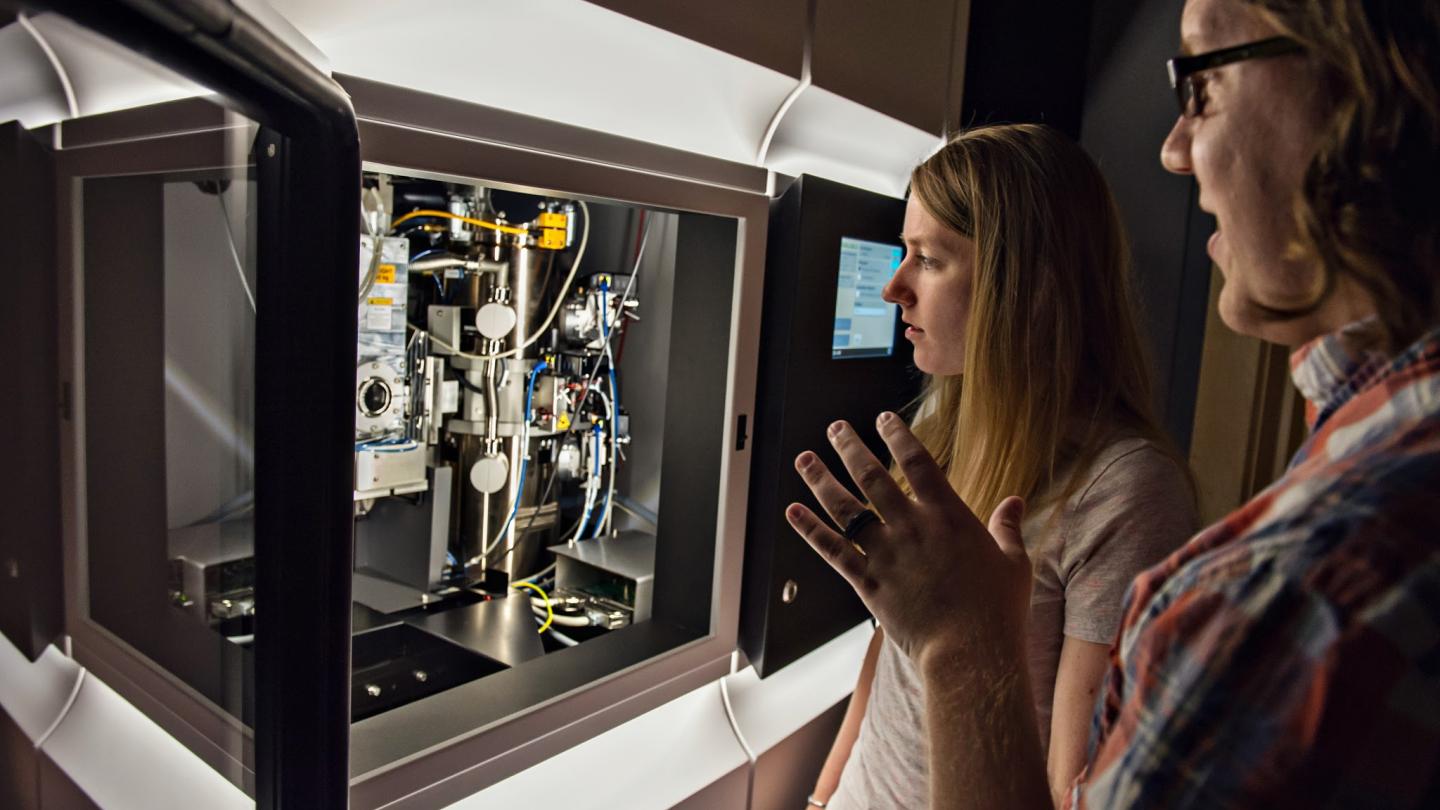 When Stephanie Gates and Adam Yokom arrived as graduate students in the University of Michigan’s Program in Chemical Biology, neither really knew what research they wanted to explore. Now, five years later, they have successfully defended their theses and are preparing to launch their careers — with co-first authorship on a high-impact paper and expertise in one of the hottest areas of biology.

Coming from liberal arts undergraduate programs (Millikin University in Decatur, Illinois, for Gates and Oakland University in Rochester Hills, Michigan, for Yokom), both students were attracted to the interdisciplinary nature of U-M’s chemical biology program — which is led by Life Sciences Institute faculty member Anna Mapp, Ph.D., and administratively housed at the LSI.

“I had no clear idea what I was doing when I got to graduate school,” Yokom admits, “which is why a program that was interdisciplinary was perfect for me. It was really what made me come here.”

This attraction to studying a variety of disciplines also made both students open to new research experiences, like the trail-blazing cryo-electron microscopy program at the LSI.

Cryo-electron microscopy, or cryo-EM, is used to determine 3-D structures of protein complexes and molecules. Active protein samples are flash-frozen in solution, allowing researchers to see the molecules in a near-native state. The LSI’s cryo-EM lab is one of the top facilities in the country, housing four cryo-electron microscopes.

Gates and Yokom didn’t know much about cryo-EM when they arrived at the LSI. But rotating in the lab of Daniel Southworth, Ph.D., provided enough hands-on experience to inspire their leap into this up-and-coming field.

“I think coming from smaller science programs with a more liberal arts approach gave us the mindset to be open to new things,” Yokom says. “If we see something that looks interesting, we just jump into it.”

Their willingness to “just jump into” the cryo-EM project paid off — although not without a few challenges and more than a little dedication to the research.

Plunging into the Data

The Southworth lab focused on how proteins work within the cell to help maintain cell quality. In late 2015, Yokom began working on a collaborative project between the Southworth lab and a group at the University of Pennsylvania to identify the structure of heat shock protein 104 (Hsp104). This protein complex, called a disaggregase, pulls apart misfolded protein threads that can accumulate in cells and become toxic.

A major strength of cryo-EM technology is that it allows researchers to see a molecule during different states of its activity, Southworth explains. In the case of Gates and Yokom’s project, the researchers hoped cryo-EM could uncover not just the structure of the molecule, but the steps of its cycle to unfold the problematic proteins.

“It was really a two-pronged question,” says Southworth. “First, how do these proteins keep the cell healthy and prevent the aggregates from becoming deleterious? And second, how do they actually grab a substrate and pull it through the complex’s central channel?”

After some exciting initial results, Southworth wanted to ramp up the focus on this work. Gates joined project in early 2016, allowing the lab to delve further into what Southworth describes as a “massive undertaking.”

Despite lab-wide excitement about this project, technical hurdles threatened its success even as the lab was gearing up its efforts.

Because this work operates on the frontiers of structural biology, there are still technical challenges associated with just being able to get data with cryo-EM, Southworth notes. And because the process is so new, there often is little existing information to use as a starting point — which meant a lot of trial and error.

Yokom spent nearly half a year testing various parameters and screening conditions, just to get to the point where he and Gates could begin collecting high-quality data.

After that initial period of frustration, the pace of the project began to accelerate. Gates and Yokom spent summer 2016 collecting images and data. And as the quality of the data increased, so did their drive.

“The first time we saw the 2-D image of the substrate-bound state we were looking for, we just got really excited,” Yokom says. “And we basically made the choice then to invest a lot of our time, personally.”

And by “a lot” of their time, they really mean all of their time. During one week that summer, either Gates or Yokom — who happen to be married to each other — could be found on the microscope around the clock on alternating 12-hour shifts.

“It was never required of us to work that much,” Yokom says. “For us it was more about the excitement for the project and just going after the data.”

And perhaps more quickly than they anticipated, their leap of faith paid off when they landed at the data they’d been seeking. “The first time we really saw the structure, we just knew: this is worth it,” Gates says. “The time, the effort, the exhaustion — everything.”

The big payoff came in June 2017: Within two years of starting the project, their findings were published in an article in Science, with Gates and Yokom as co-first authors.

Jumping with a Net

Gates and Yokom are quick to credit their success to the research environment they found at U-M.

“There’s a wide net of support at Michigan, not only in the Program in Chemical Biology, but at the LSI and the university,” Yokom says. “Cryo-EM is very expensive, and the university has really invested in that infrastructure, which has been a great opportunity for us. And just having access to other faculty members who were so willing to provide input on the project has been incredibly valuable.”

Gates notes that their access to the cryo-electron microscope was a huge factor, as well — and an opportunity that isn’t available, especially to graduate students, at many other institutions.

“The LSI is really at the forefront of the field, in terms of the technology we have,” she says. “We wouldn’t be able to do this level of work if we didn’t have the kind of technology and support that are available at the LSI.”

When Gates and Yokom jumped into cryo-EM, they did not know where they would land. But as they prepared this summer to graduate, they discovered that successful completion of the project is really a new jumping-off point.

Being trained as graduate students to do cryo-EM gave both researchers an advantage as they sought out postdoctoral research positions. While many researchers go into postdoctoral fellowships to learn how to use cryo-EM, Gates and Yokom already have five years of expertise under their belts.

And it’s a good time to be an expert in cryo-EM. The journal Nature Methods named it the 2015 Method of the Year, and the NIH recently announced plans to invest heavily in developing national cryo-EM facilities. This LSI, too, hired two new faculty with cryo-EM expertise this year, and is investigating how to make the resource more widely available to the campus.

“I’m really glad I took this leap of faith,” Gates says. “When we were first considering joining the lab, a lot of people in the field still had doubts about the future of cryo-EM. But in the last five years, the technology and its adoption have really skyrocketed. There are so many opportunities now — far beyond what we would have predicted when we started this work.”

Both students have landed postdoctoral fellowships where they can continue developing their cryo-EM expertise. In fall 2017, they will begin the next phase of their research at the University of California, Berkeley, in labs that are what they call “cryo-adjacent” — labs that are working on a big biological question, where cryo-EM may be able to help discover the answer.

“We want to make sure that we continue to be driven by the science,” Gates emphasizes. “Not just doing cryo-EM, but using cryo-EM to answer really interesting questions.”