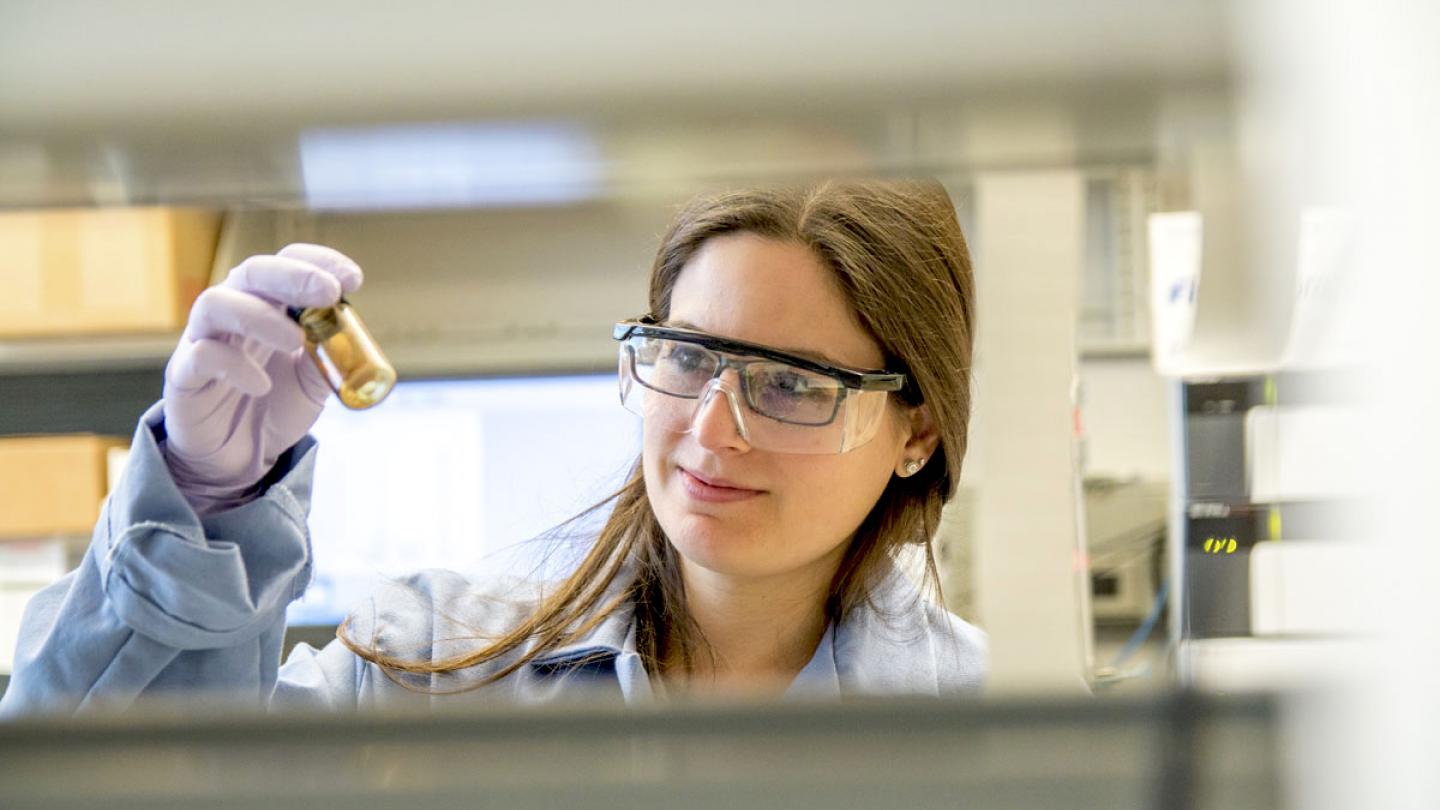 When Laura Mike arrived for her postdoctoral fellowship at the University of Michigan in 2014, she knew she wanted to find new ways to prevent and treat infection.

While the mass-production of penicillin in 1945 saved lives and laid the groundwork for a golden era of antibiotic discovery, by the 1970s the discovery rate had declined. Researchers have struggled to stay a step ahead of growing antibiotic resistance given the trickle of new alternatives entering the market.

“We keep modifying the antibiotics we already have,” says Mike, who divides her time between labs in the U-M Life Sciences Institute and the Medical School.

Resistance now threatens to eclipse some of our best lines of defense. As a result, Mike and other researchers have focused on finding new strategies and approaches.

Mike is particularly interested in targeting bacteria’s need to scavenge iron from its human host in order to survive.

“We’re looking for compounds that inhibit iron acquisition,” she says. “That’s a different therapeutic strategy than what is currently licensed.”

She’s focusing specifically on bacteria that cause urinary tract infections, or UTIs, which affect half of all women, and some men, at some point in their lives.

Most individuals can successfully treat their infection with antibiotics, but 1 in 40 women experience recurrent infections, defined as an infection every six months. And for some, it’s even more often. These UTIs are often uncomfortable and painful — and if left untreated, they can cause kidney damage or blood poisoning.

In the laboratory of Harry Mobley, Ph.D., chair of the U-M Medical School’s Department of Microbiology & Immunology, Mike created a vaccine using siderophores. These small molecules are produced by pathogenic E. coli (as well as by some other bacteria) in order to grab iron from their human hosts.

The vaccine provided partial protection against UTIs in mice and the research paves the way for further studies that could lead to a fully protective vaccine.

Mike is also a member of the lab of LSI faculty member David H. Sherman, Ph.D.

“I couldn’t have planned a better situation,” she says of the setup, which allows her to attack UTIs on two different fronts: One is working on a vaccine to prevent an infection; the other is developing an antibiotic in Sherman’s lab to treat infections. 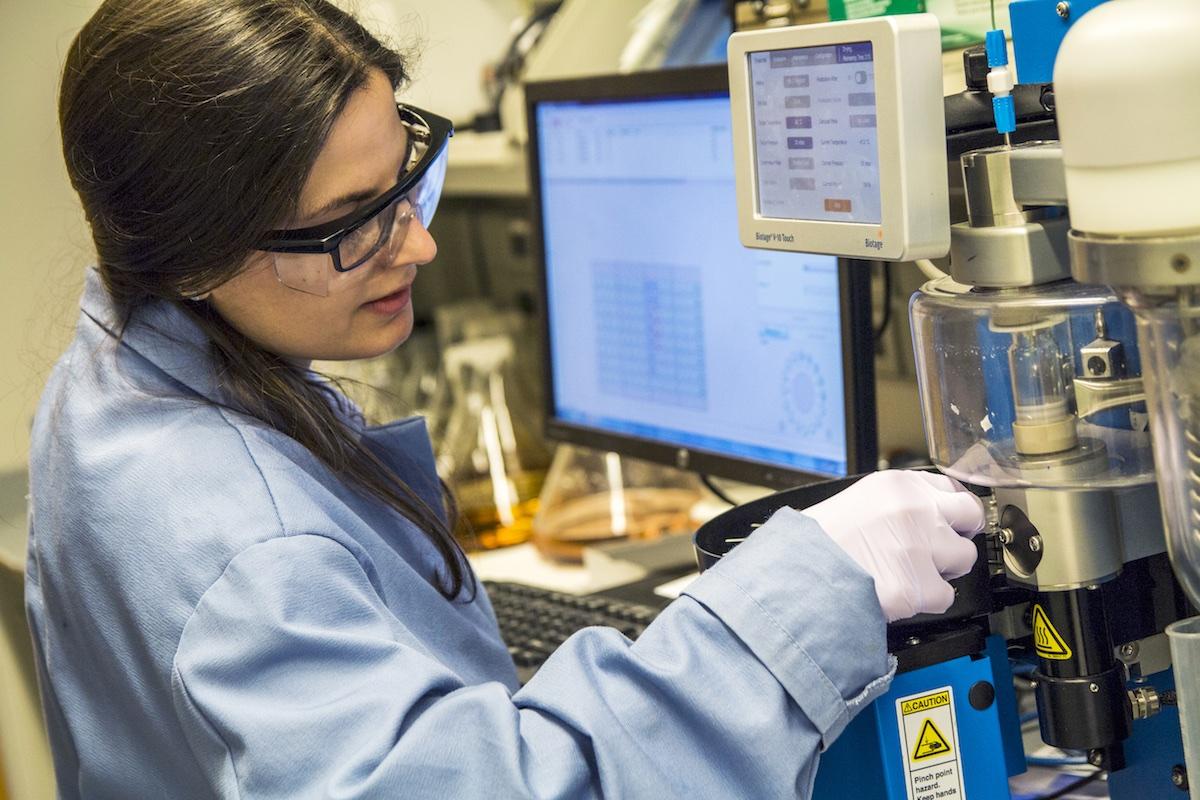 At the LSI, Mike works with “natural products” — scientists’ shorthand for chemical compounds produced by bacteria, fungi and other organisms, often as defense mechanisms.

“What’s really neat about natural products in research,” she says, “is that the microorganisms have already done that hard, initial work of evolving to produce these complex compounds with beneficial properties. Our job is to identify them, develop ways to produce them sustainably in the lab, and optimize their properties.”

The Center for Chemical Genomics, a high-throughput screening facility at the LSI, houses a unique library of 44,000 natural product extracts developed by the Sherman lab. (Sherman was previously the director of the CCG.) In her antibiotic-focused work, Mike screened these extracts looking for “hits” that inhibited E. coli growth in a low iron environment — suggesting the natural products were targeting iron acquisition.

She initially selected 40 bacterial strains that produce natural products that inhibit E coli. And from there, she narrowed it down to the single strain that does so most effectively.

The bacteria she identified was from a sample collected by Sherman during a diving expedition off the coast of the Nicoya Peninsula in Costa Rica. As a result, the lab refers to the bacteria’s natural products as “nicoyamycins.” Mike has already identified the one nicoyamycin molecule that inhibits iron, naming it Nicoyamycin A.

Says Mike: “Just trying to isolate a pure molecule of the antibiotic is difficult because you have to take a complex mixture and separate it to the point where you only have a single molecule in your tube. That requires multiple rounds of purification.” Once the process is complete, researchers can begin to characterize the molecule, determining its mass and chemical structure.

Going forward, Mike hopes to learn precisely how Nicoyamycin A interferes with iron acquisition. She also plans to engineer a bacterial strain that produces large quantities of Nicoyamycin A, which will facilitate her research.

It can be quite a challenge to obtain sufficient quantities of a given natural product. The mass production of penicillin, for example, was greatly aided by the discovery of a highly-producing strain of Penicillium notatum found growing on an over-ripe cantaloupe in Peoria, Illinois.

“A lot of people don’t work with natural products because they’re difficult,” says Mike, “but the pay-off is big if you can find a new structure.”