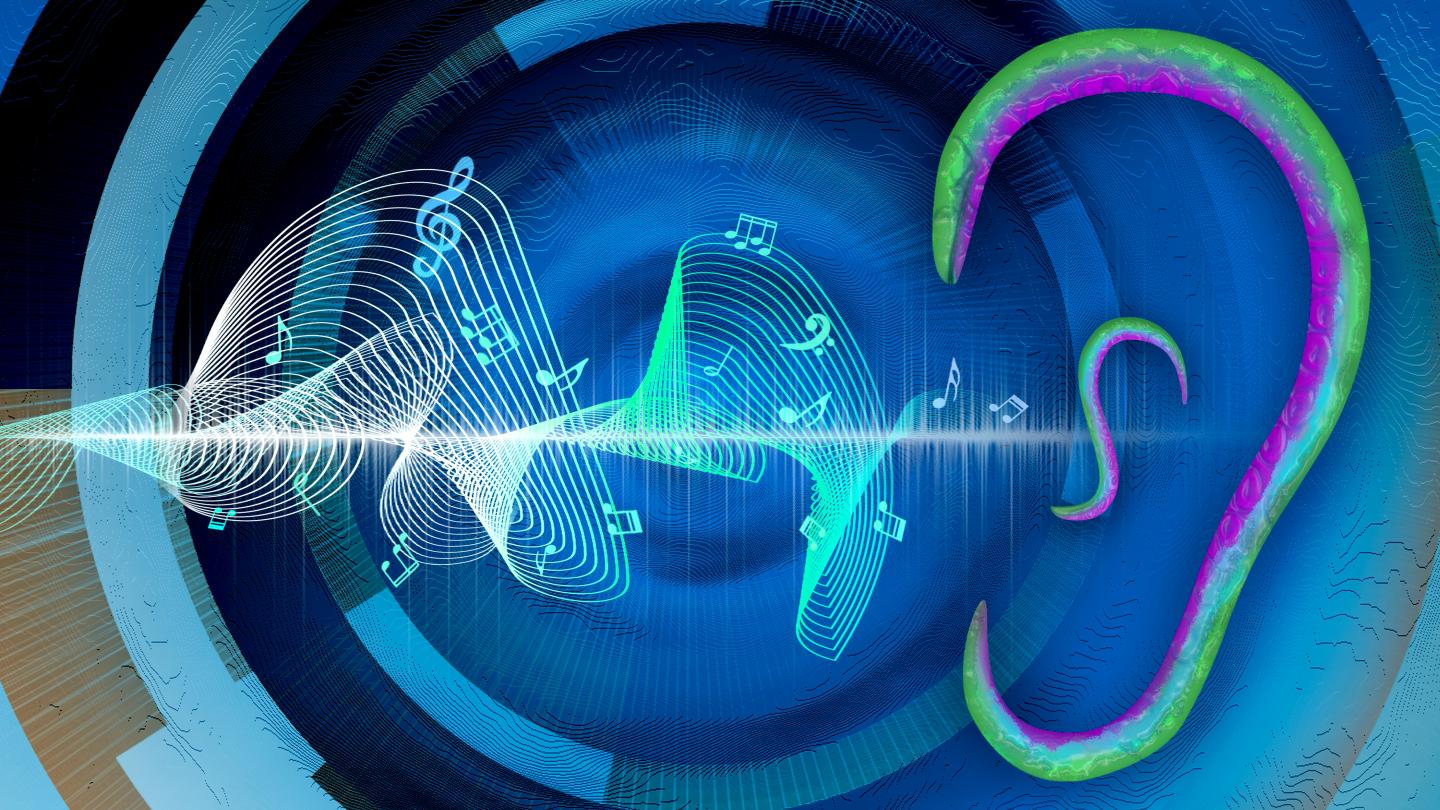 Earless worms ‘listen’ through their skin

ANN ARBOR—A species of roundworm that is widely used in biological research can sense and respond to sound, despite having no ear-like organs, according to a new study from the University of Michigan Life Sciences Institute.

The findings, published in the journal Neuron on Sept. 22, offer a new biological tool for studying the genetic mechanisms underlying the sense of hearing.

Researchers in the lab of Shawn Xu, Ph.D., at the LSI have been using Caenorhabditis elegans to study sensory biology for more than 15 years. When his lab began this work, these millimeter-long worms were thought to have only three main senses: touch, smell and taste.

“There was just one more primary sense missing — auditory sensation, or hearing,” says Xu, a research professor at the LSI and the study’s senior author. “But hearing is unlike other senses, which are found widely across other animal phyla. It’s really only been discovered in vertebrates and some arthropods. And the vast majority of invertebrate species are thus believed to be sound insensitive.”

The scientists discovered, however, that worms responded to airborne sounds in the range of 100 hertz to 5 kilohertz — a range broader than some vertebrates can sense. When a tone in that range was played, worms quickly moved away from the source of the sound, demonstrating that they not only hear the tone but sense where it’s coming from.

Our study shows that we cannot just assume that organisms that lack ears cannot sense sound.

Not just a feeling

The researchers conducted several experiments to ensure the worms were responding to airborne sound waves, and not vibrations on the surface worms were resting on. Rather than ‘feeling’ the vibrations through the sense of touch,Xu believes the worms sense these tones by acting as a sort of whole-body cochlea, the spiraled, fluid-filled cavity in the inner ear of vertebrates.

And because the two neuron types are localized in different parts of the worm’s body, the worm can detect the sound source based on which neurons are activated. This sense may help worms to detect and evade their predators, many of which generate audible sounds when hunting.

The research raises the possibility that other earless animals with a soft body like the roundworm C. elegans — such as flatworms, earthworms and mollusks — might also be able to sense sound.

“Our study shows that we cannot just assume that organisms that lack ears cannot sense sound,” says Xu, who is also a professor of molecular and integrative physiology at the U-M Medical School.

While the worms’ auditory sense does bear some similarities to how the auditory system works in vertebrates, this new research reveals important differences from how either vertebrates or arthropods sense sound.

“Based on these differences, which exist down to the molecular level, we believe the sense of hearing has probably evolved independently, multiple times across different animal phyla,” Xu says. “We knew that hearing looks very different between vertebrates and arthropods. Now, with C. elegans, we have found yet another different pathway for this sensory function, indicating convergent evolution. This stands in sharp contrast to the evolution of vision, which, as proposed by Charles Darwin, occurred quite early and probably only once with a common ancestor.”

Now that all major senses have been observed in C. elegans, Xu and his colleagues plan to delve further into the genetic mechanisms and neurobiology that drive these sensations.

Top Image: New research reveals that the roundworm C. elegans (shown in the shape of an ear), a common model species used in biological research, can sense and respond to airborne sound waves despite having no ear-like organs. Image credit: Rajani Arora, University of Michigan Life Sciences institute.