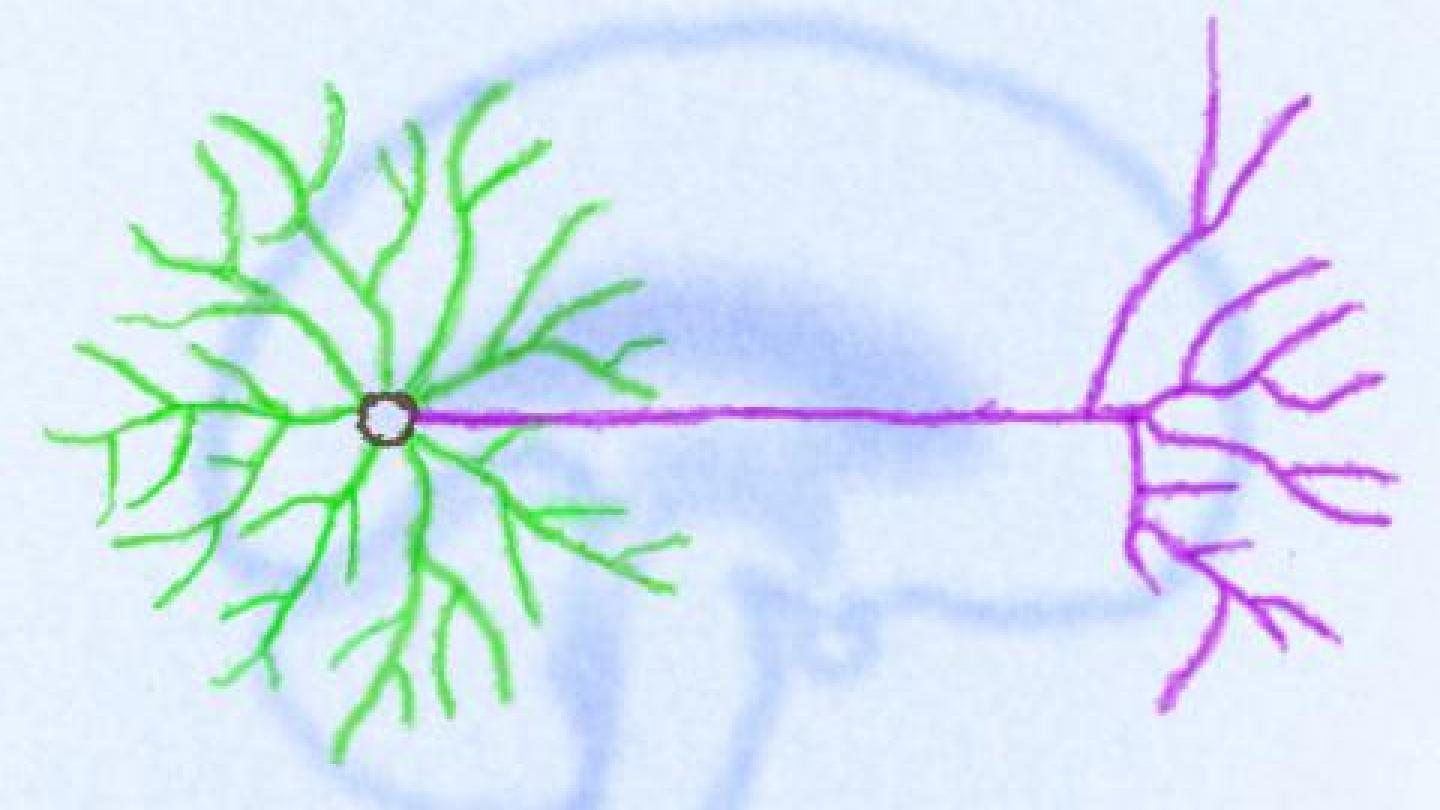 Neuronal regeneration and the two-part design of nerve cells

Researchers at the University of Michigan have evidence that a single gene controls both halves of nerve cells, and their research demonstrates the need to consider that design in the development of new treatments for regeneration of nerve cells.

A paper scheduled to be published in PLOS Biology on June 4 by U-M Life Sciences Institute faculty member Bing Ye and colleagues shows that manipulating Drosophila genes to promote the growth of one part of the neuron simultaneously stunts the growth of the other part.

Understanding this bimodal nature of neurons is important for researchers developing therapies for spinal cord injury, neurodegeneration and other nervous system diseases, Ye said.Nerve cells look strikingly like trees, with a crown of “branches” converging at a “trunk.” The branches, called dendrites, input information from other neurons into the nerve cell. The trunk, or axon, transmits the signal to the next cell.
“If you want to regenerate an axon to repair an injury, you have to take care of the other end, too,” Ye said.The separation of the nerve cell into these two parts is so fundamental to neuroscience that it’s known as the “neuron doctrine,” but how exactly neurons create, maintain and regulate these two separate parts and functions is still largely unknown.

While the body is growing, the neuronal network grows rapidly. But nerve cells don’t divide and replicate like other cells in the body (instead, a specific type of stem cell creates them) and adult nerve cells appear to no longer have the drive to grow, so the loss of neurons due to injury or neurodegeneration can be permanent.

Ye’s paper highlights the bimodal nature of neurons by explaining how a kinase that promotes axon growth surprisingly has the opposite effect of impeding dendrite growth of the same cell.

In the quest to understand the fundamentals of nerve cell growth in order to stimulate regrowth after injury, scientists have identified the genes responsible for axon growth and were able to induce dramatic growth of the long “trunk” of the cell, but less attention has been given to dendrites.

There are technical reasons that studying axons is easier than studying dendrites: The bundle of axons in a nerve is easier to track under the microscope, but to get an image of dendrites would require labeling single neurons.

Ye’s lab circumvented that obstacle by using the Drosophila, or fruit fly, as a model. Using this simple model of the nervous system, the scientists were able to reliably label both axons and dendrites of single neurons and see what happened to nerve cells with various mutations of genes that are shared between the flies and humans.

One of the genes shared by Drosophila and people is the one that makes a protein called Dual Lucine Zipper Kinase, or DLK. As described previously by other groups, DLK is a product of the gene responsible for axon growth; cells with more of the protein had very long axons, and those without the gene or protein had no regeneration after nerve injury. The DLK kinase seemed a promising target for therapies to regenerate nerve cells.

However, Ye’s lab found that the kinase had the opposite effect on the dendrites: Lots of DLK lead to diminished dendrites.

“This in vivo evidence of bimodal control of neuronal growth calls attention to the need to look at the other side of a neuron in terms of developing new therapies,” Ye said. “If we use this kinase, DLK, as a drug target for axon growth, we’ll have to figure out a way to block its effect on dendrites.”

Ye is a faculty member at the Life Sciences Institute, where his laboratory is located and all his research is conducted. He is an assistant professor in the Department of Cell & Developmental Biology at the University of Michigan Medical School.

Other authors on the paper were Xin Wang, Jung Hwan Kim, Mouna Bazzi and Sara Robinson from the University of Michigan Life Sciences Institute; and Catherine A. Collins from the Department of Molecular, Cellular and Developmental Biology at the U-M College of Literature, Science, and the Arts.